Crock Pot sausage and peppers feature Italian sausages simmered in marinara sauce with peppers and onions and piled high on a brat bun with Provolone cheese.

Italian sausages are the Rodney Dangerfield of the brat case at the grocery store, they get no respect. Sure, some people will buy them to incorporate into pasta sauces and related dishes, but when is the last time you have cooked up a nice juicy Italian sausage and served it on a hearty brat bun? Well, ladies and gentlemen, that time has come!

This crock pot sausage and peppers recipe was inspired by my previously published Loaded Italian Sausage and Peppers recipe. This is the easy slow cooker version.

How Do You Cook Sausage in the Slow Cooker

Sausages are easy to cook in the slow cooker. First of all, I recommend a standard 6 quart Crock Pot for this recipe, although you can get by with a slightly smaller one. The sausages cook best when they are simmering in liquid, such as marinara sauce (you can substitute pasta sauce if needed). Plan on the sausages taking 4-5 hours when cooking on low.

Can You Cook Frozen Sausages in Slow Cooker

If you are like me, you don't plan ahead very well and are pulling ingredients out of the freezer when it is time to start cooking. Don't worry, you can cook frozen sausages in the slow cooker, just plan on it taking an extra hour or so to cook.

What Goes Well With Sausage and Peppers

Simply serving your cooked sausage and peppers in marinara sauce would make a great meal by itself. However, this is a fantastic meal to serve on hearty brat buns with tender onions and Provolone cheese! Like I mentioned, brat buns are the best, however, you can substitute hoagie rolls if needed.

How to Serve Crock Pot Sausage and Peppers

This is best served with the cheese melted. I like to pile the hot peppers, onions, and sauce on the cheese to melt it quickly, however, sometimes I will also toss it in the oven for a couple minutes to assist with the melting. This works particularly well with a hearty brat bun that can stand up to a little heat. I don't recommend baking lighter weight hotdog buns, or they dry out and become crumbly.

Also, instead of topping my sausage with the marinara liquid from the slow cooker, sometimes I enjoy serving it on the side for dipping, similar to Italian Beef Sandwiches. 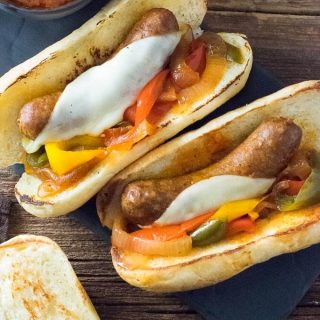 Tip: Many hearty brat buns taste best lightly toasted.  If you cannot find brat buns, hoagie rolls will also work.   Sauce from the crock pot can either be added to the bun or served separately to dip the sausage/bun into.   IF YOU LIKED THIS RECIPE you will love my Roasted Pork Sandwich too!

If you enjoyed reading my Crock Pot Sausage and Peppers recipe then you should probably like me on Facebook and follow me on Pinterest too. That’s what I would do at least, because if you don’t get to know me but you still use my recipe it is kind of like taking candy from a stranger, and your mom taught you not to do that. Don’t disobey your mom, subscribe to Fox Valley Foodie today.