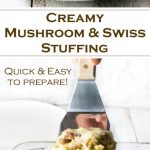 This Creamy Mushroom and Swiss Stuffing is a decadent side dish that is quick and easy to throw together. You've never had stuffing like this!

Stuffing is likely my favorite side dish in the whole wide world. Some people want to sit down in front of the TV with a big bowl of ice cream, not me, give me a big bowl of stuffing and I'll be just as happy! I guess this Creamy Mushroom and Swiss Stuffing is probably the stuffing equivalent of a giant ice cream sundae then, topped with melted cheese, flavorful mushrooms, and infused with luxurious cream of chicken soup! I'm still talking about the stuffing, not the ice cream. No one wants mushrooms on their ice cream.

This Creamy Mushroom and Swiss Stuffing recipe has quickly become one of my favorite ways to make stuffing.  I first made this recipe accidentally when I was preparing my Portobello Swiss Chicken Bake recipe. I baked the chicken on top of a bed of stuffing and all of the flavor soaked in every nook and cranny. When I took my first bite, angels appeared above me and started singing country songs in a heavenly chorus.

Speaking of angels and heaven. I have a confession to make. Box stuffing is one of my guilty pleasures. Don't get me wrong, I enjoy a good stuffing made from scratch, and I have an awesome stuffing recipe I developed. However, I only make it for holidays. The rest of the year I'm eating stuffing from a box. Please judge me quietly.

Using stuffing from a box really makes this recipe simple. It takes minutes to throw together. You will notice the recipe calls for low sodium chicken broth. This is because the seasoning packet in the box stuffing contains plenty of salt. There is also salt in the cream of chicken soup. If you are sensitive to salt you can either substitute salt-free chicken stock or simply use water.

I find a 8x8 inch baking dish is perfect for this Creamy Mushroom and Swiss Stuffing recipe. You don't have to use this exact size, any similar size will work fine. If you use a larger pan, you may need more cheese for topping. The pan I linked at the beginning of this paragraph is the pan I use. 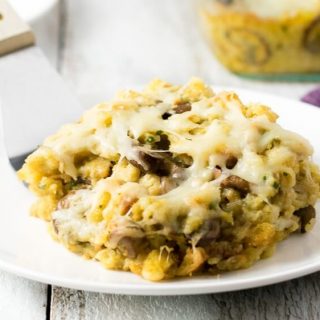 This Creamy Mushroom and Swiss Stuffing is a decadent side dish that is quick and easy to throw together. You've never had stuffing like this!
5 from 1 vote
Print Pin Rate Save Saved
Course: Side Dish
Cuisine: American
Prep Time: 5 minutes
Cook Time: 30 minutes
Total Time: 35 minutes
Servings: 6
Calories: 250kcal
Author: Fox Valley Foodie

IF YOU LIKED THIS RECIPE you will love the Portobello Swiss Chicken Bake that inspired it!

If you enjoyed reading my Creamy Mushroom and Swiss Stuffing recipe then you should probably like me on Facebook and follow me on Pinterest too. That’s what I would do at least, because if you don’t get to know me but you still use my recipe it is kind of like taking candy from a stranger, and your mom taught you not to do that. Don’t disobey your mom, subscribe to Fox Valley Foodie today.