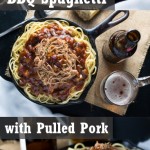 I have a new favorite spaghetti! And not just any spaghetti, this BBQ spaghetti recipe with pulled pork! It is like your favorite Italian restaurant had an illegitimate love child with a rundown BBQ shack! Scandalous, I know! What will the neighbors think?!?

BBQ and Italian food may not seem to be a match made in heaven in most people's minds, but my tastebuds think barbecue spaghetti tastes downright miraculous! Seriously, long tender shreds of pulled pork tangled among al dente strands of spaghetti noodles, all smothered in a sticky tangy BBQ sauce - what's not to love!?!

If you are looking for a more traditional BBQ recipe, you won't be disappointed with the stickiest BBQ ribs recipe to ever come out of an oven.  If you are looking for a traditional Italian recipe, you can't do wrong by delighting your family with my Chicken Parmesan! But... If you are willing to take a walk on the culinary wild side, this BBQ spaghetti with pulled pork recipe is downright amazing.  Try it. Just do it. You're welcome.

Optional: If you wish to add a little more kick to your barbecue sauce, black pepper, and crushed red pepper flakes are great additions. Green onions work well as a garnish, to add a pop of color when serving.

How to make Pulled Pork

This recipe includes a simple pulled pork recipe but also works just as well by substituting your own recipe, or evening buying pre-made pulled pork from the grocery store.

You can make pulled pork in the oven, or use a smoker if you really want to rock it! But for most of us, without a smoker at our fingertips, a slow cooker is going to be the ideal cooking method for this succulently tender meat.  You can add the meat, along with a little water and liquid smoke, then set it and forget it as you go about your day. It will be done in six hours, or when it is easily shredded. Then mix it with a half bottle of BBQ sauce.

How to make BBQ Spaghetti

Once your pulled pork is ready the rest of the process isn't any harder than making homemade spaghetti. Simply boil your noodles in a pot of salted water until they are al dente, then drain.

While the noodles boil, add the peppers and onions to a large saucepan (or large skillet) and saute with a little bit of cooking oil until tender. Then the remaining BBQ sauce can be added.

The noodles can be tossed with the BBQ sauce mixture as well, or served with the sauce ladled on top (as shown in my photos). Serve topped with pulled pork.

Leftovers should be stored in an airtight container in your refrigerator and enjoyed within five days. This meal is easiest to reheat in separate individual servings in the microwave until heated through. 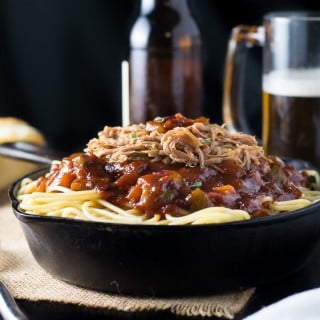 Any BBQ pulled pork recipe will work well with this recipe. I provided a basic pulled pork recipe that won't be challenging for most people, but don't be afraid to add your own additions and seasonings. I recommend using a tomato based BBQ sauce for this recipe. This dish also tastes great topped with sour cream and green onions.

This recipe was originally published September 13, 2015, on FoxValleyFoodie.com.