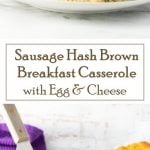 My sausage hash brown breakfast casserole with egg and cheese recipe is full of your favorite breakfast flavors and a sure crowd pleaser.

Man, I love the smell of sausage cooking in the morning. They say smell is one of the strongest triggers of memory, and I fully believe it. As soon as I catch the familiar aroma of sausage frying in the skillet I am flooded with great memories. You see, sausage is never made for just any ol' breakfast. You have cereal for that. Sausage is the little black dress of breakfast - it is fried up for special occasions, and as soon as I smell it I am transported back to happy times from days gone by. 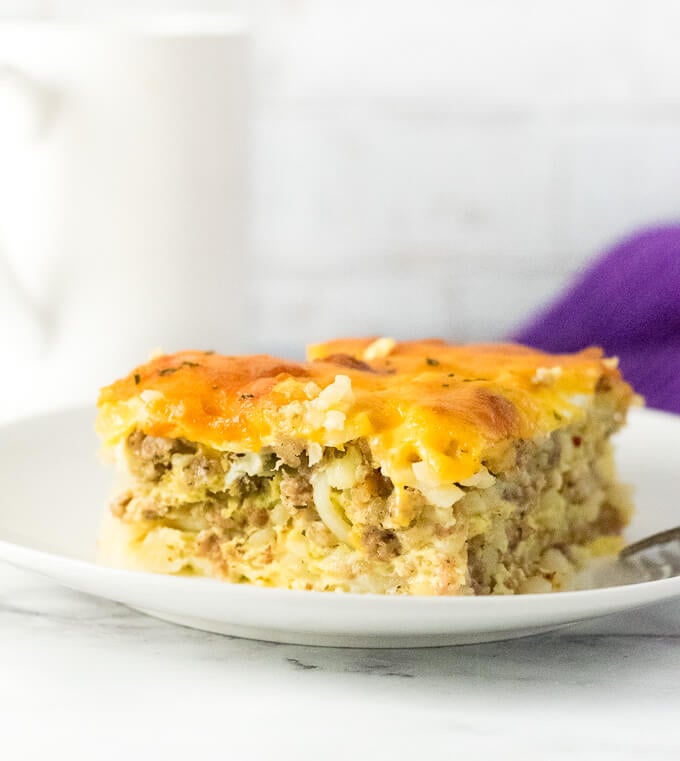 There is not just one specific memory it ever reminds me of. It is more of a memory collage of trips to Canada, camping, and special Saturday morning family breakfasts that creates an overall nostalgic feeling. Similar to my thoughts on my sawmill gravy recipe, I feel a hearty family breakfast is often symbolic of the love and caring that inspired the cook to craft it.

The problem with any special breakfast is you have to cook it in the morning. Often that means waking up earlier, or muddling through the kitchen before you are properly caffeinated. Neither is an enviable prospect. That is what I love so much about this sausage hash brown breakfast casserole; it can be made in advance!

Yep, this sausage hash brown breakfast casserole is just as delicious if you make it all at once during a morning session or if you prep it the night before and stick it in the refrigerator. If you are going to make it the night before you can complete the entire recipe right up until you need to bake it. Then the following morning just move it from the fridge to the preheated oven. 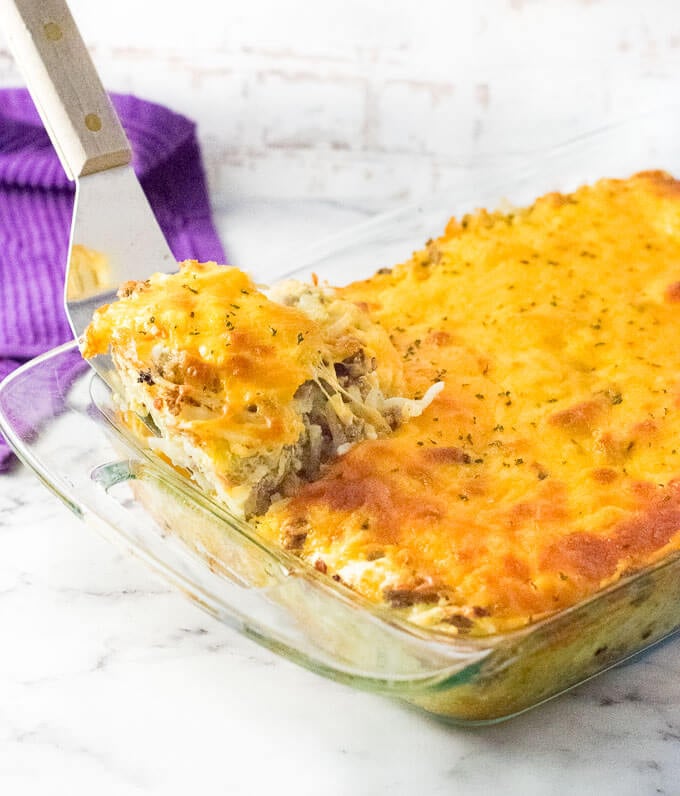 This sausage hash brown breakfast casserole with egg and cheese recipe fits perfectly in a 9x13 baking pan (affiliate link) Personally, I like using a glass pan like Pyrex. It won’t stain, it is dishwasher safe, and I don’t have any issues with the food sticking to it. Plus, they are quite reasonably priced. You won't regret buying one if you don't already have it in your kitchen.

Once your pan is ready to go, this breakfast casserole is really easy to make. Simply brown the sausage in a skillet, do the same with the hash browns, then add everything to your baking dish. It is best to bake this covered for 30 minutes to help the eggs cook, then uncover to allow the cheese to brown slightly. 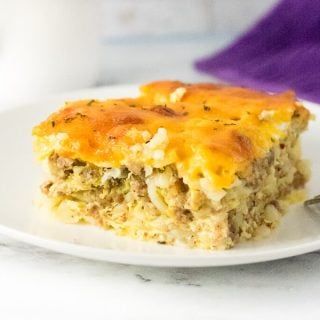 This sausage hash brown breakfast casserole with egg and cheese is just as delicious if you make it all at once during a morning session or if you prep it the night before and stick it in the refrigerator. Your family with love it!
5 from 3 votes
Print Pin Rate
Course: Breakfast
Cuisine: American
Prep Time: 10 minutes
Cook Time: 45 minutes
Total Time: 45 minutes
Servings: 8 servings
Calories: 566kcal
Author: Fox Valley Foodie

IF YOU LIKED THIS RECIPE you will love my Grandma's Buttermilk Oatmeal Pancakes recipe too!

This Sausage Hash Brown Breakfast Casserole was originally published on FoxValleyFoodie.com May 10, 2015.

If you enjoyed reading about my sausage hash brown breakfast casserole with egg and cheese recipe then you should probably like me on Facebook and follow me on Pinterest too. That’s what I would do at least, because if you don’t get to know me but you still use my recipe it is kind of like taking candy from a stranger, and your mom taught you not to do that. Don’t disobey your mom, subscribe to Fox Valley Foodie today.