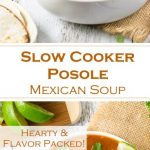 Slow Cooker Posole is a hearty Mexican soup that is a meal in itself. Each bowl is brimming with tender shredded pork, hominy, and bold seasonings that will jump right off your spoon!

I wish I was as good at sleeping as I am at cooking. Unfortunately, that isn't the case. When I have a bad night of sleep I know I have a fleeting window of energy to use during the day so I frantically get my work done in the morning before the time-bomb goes off and I morph into a useless pile of poo for the rest of the day. Did I really just type poo?

That is why I love slow cooker meals like this Mexican soup. Posole is a hearty meal in itself and it can easily be thrown together in the crock pot in the morning and then cook all day while I attempt to nap.

Posole, or often written as "pozole", is a traditional Mexican soup meaning "hominy". Much like American chili, there are a wide variety of recipe variations and ingredients used. However, at a minimum, you can expect to find pork and hominy in most recipes.

The best pork to use in Posole is pork shoulder. The tough, fatty cut, is not only dirt cheap, it breaks down into exceptionally tender shreds after a long simmer in the slow cooker. The fat also renders out to create a luxurious broth. If you can't find pork shoulder, often called "Boston Butt", any pork roast will suffice as a substitution.

You can really cook posole in the slow cooker as long as you wish. The only key is making sure you cook it long enough to allow the meat to easily shred. I find 5-6 hours on high is sufficient time for the meat to transform. You can cook this on low as well, but expect to add a few more hours to the cook time.

The toppings for your posole are as important as the soup itself. Though cilantro is listed as a garnish, it's fresh flavor, combined with lime juice, really jumps out of the soup, while the creaminess of the cheddar cheese melds into the broth. Other topping options include chopped onion, avocado, or even shredded cabbage.

This recipe is best for a 6-quart slow cooker. I made it in my 5-quart slow cooker, but it really fills it up! If you don't own a proper slow cooker, I recommend getting a nice simple one. No need for fancy electronics or timers, simply a slow cooker with a high, low, and warm setting will suffice. 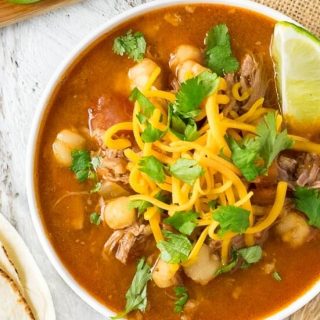 IF YOU LIKED THIS RECIPE you will love my Slow Cooker Mexican Shredded Beef recipe too!

If you enjoyed my Slow Cooker Posole - Mexican Soup recipe then you should probably like me on Facebook and follow me on Pinterest too. That’s what I would do at least, because if you don’t get to know me but you still use my recipe it is kind of like taking candy from a stranger, and your mom taught you not to do that. Don’t disobey your mom, subscribe to Fox Valley Foodie today.