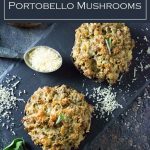 Portobello mushrooms are the tortilla chip of the fungi world. Perfect for loading with your favorite toppings and serving as a hearty entree. Although this recipe calls for portobellos, you can scale it down with smaller mushrooms for finger-food appetizers instead.

These sausage stuffed portobello mushrooms are piled high with a creamy mixture of ground sausage, cream cheese, herbs, and breadcrumbs, then topped with grated Parmesan cheese which crisps while baking. I really feel fresh sage is the star of this dish though because it pairs so nicely with both sausage and mushrooms.

Cream cheese adds a satisfying creaminess to the filling, while the breadcrumbs and egg yolk are added for structural stability. You can omit the breadcrumbs to make this dish more low carb friendly, but the filling will ooze over if piled too high.

When crafting a portobello mushroom recipe it is often difficult to nail down the exact recipe yield because portobello caps vary in size so greatly at the grocery store. This recipe fills 6-8 large mushroom caps. You also have some flexibility in how high you pile the filling as well.

How to Cook Sausage Stuffed Mushrooms

Since you are working with raw ground sausage, it is important to cook the sausage in a skillet prior to topping the mushrooms with filling. Otherwise, it won't cook through properly in the oven. This also allows you to saute chopped onion and mushroom stems for additional filling and texture.

Once the filling has been prepared and loaded on the mushrooms the stuffed mushrooms can be baked at 400 degrees for 25 minutes.

Italian sausage stuffed mushrooms is a popular dish, however, I go a different route by using bulk country sausage instead, such as Tennessee Pride (affiliate link), for example. The herbal mixture of the country sausage is nicely highlighted with the punch of fresh sage and parsley used in this recipe. However, this recipe will still turn out great if you wish to use your favorite Italian sausage instead.

As with any stuffed mushroom recipe, you have a lot of flexibility in how you craft your filling. You can remove the cream cheese and breadcrumbs entirely for a lower calorie option, or sprinkle in some cheddar cheese for another layer of flavor. Additionally, your favorite herbs can be swapped in as well. Finally, feel free to use baby bella mushrooms for a finger food appetizer, however, the baking time should be reduced slightly due to ot the smaller size. 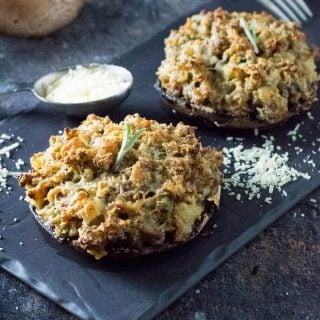 IF YOU ARE CRAVING MORE MUSHROOM RECIPES check out my Garlic Butter Roasted Mushrooms too!