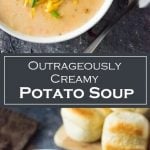 Craving some outrageously creamy potato soup? This recipe is winter comfort food at it's finest!

I am currently being robbed as I sit here writing this. Not so much by a masked intruder, but rather Old Man Winter. That nefarious devil. I was promised 5 inches of snow today, and I don't see any. I was already preemptively cherishing the memories of settling in to write this Creamy Potato Soup recipe with a hot cup of coffee while a blanket of snow softly falls outside my window.  It was going to be magical.

Instead, it is just a dreary December day with grass mockingly protruding from the thin dusting of snow, serving as a thousand green reminders of Old Man Winter's laziness. At least I still have some leftover potato soup in the fridge that I can cozy up with for lunch.

If you should so happen to have leftover potato soup as well, you will find it thickens as it sits in the fridge. You can thin it back out to your desired consistency with a few splashes of water or milk.

There are a variety of toppings you can use with potato soup, but I think bacon, cheddar cheese, and chives are essential. I almost made this recipe without bacon, but that would have been a mistake. A sprinkle of bacon on top of the soup really adds a lot of flavor. I don't recommend cooking the bacon with the soup, as some recipes call for, unless you really enjoy the gummy texture of soggy bacon. Mmm...

How to Thicken Potato Soup

Potato soup will thicken as it cooks, since the potato will gradually break down and soak in with the liquid. However, making a proper roux is the key to achieving the ideal consistency. A roux is simply a mixture of fat and flour that is cooked gently in a pan until the flour taste has been eliminated. The darker the roux gets, the more flavor it will take on, but for this creamy potato soup recipe, a light brown roux is perfect.

How to Make Creamy Potato Soup

If you are craving a flavorful soup with fewer ingredients, try my simplified 4 ingredient potato soup recipe. 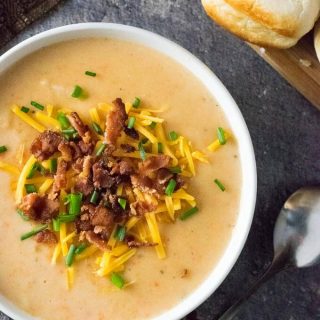 IF YOU LIKED THIS RECIPE you will love my Cheesy Potato Dill Soup too!

If you enjoyed reading my Outrageously Creamy Potato Soup recipe then you should probably like me on Facebook and follow me on Pinterest too. That’s what I would do at least, because if you don’t get to know me but you still use my recipe it is kind of like taking candy from a stranger, and your mom taught you not to do that. Don’t disobey your mom, subscribe to Fox Valley Foodie today.