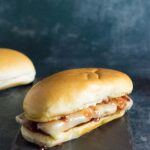 A Monte Cristo hot dog may sound crazy but it is actually incredibly delicious! A perfect balance of sweet, salty, and ooey-gooey cheese.

Every so often I discover a recipe that surprises me. The idea of putting strawberry jam on a hot dog just sounds gross, doesn’t it? How about adding the nutty taste of Swiss cheese into the mix? Who would do that? Geniuses, that’s who! It tastes amazing!

Seriously, you may not believe me, but you should try it. Loaded hot dogs don’t need to only be dressed in ketchup, mustard, relish, and hot dog chili. But does it really taste good though? Yes! The saltiness from the hot dog balances perfectly with the sweetness of the jam and the mild taste of Swiss cheese adds a nice gooey mouthfeel without competing with the flavors. These would also taste phenomenal with my smoked hot dogs too!

12” skillet – Since the quarter pound hot dogs are butterflied open they take up more room so you will want to use a large pan for this. I like my cast iron skillet since it holds heat well and creates a nice sear, but any large pan will suffice.

Begin making this Monte Cristo hot dog recipe by butterflying open the hot dogs. You want to ensure you don't cut all of the ways through them so the two halves stay connected when folded open.

Set your skillet over medium heat and melt one tablespoon of butter in the skillet, then add your hot dog. Cook until the hot dog is warmed through and a nice sear has formed on the meat, then top with a slice of Swiss cheese. Cover the hot dog with a lid to allow the cheese to quickly melt.

While the hot dog is cooking butter the inside of your brat buns. Then place the bun butter-side down and toast in the skillet until the bun is golden brown. Remove the bun from the skillet and spread jam over the upper side of the bun and add your hot dog, then serve your Monte Cristo sandwich immediately with picnic favorites such as homemade apple cider vinegar cole slaw. 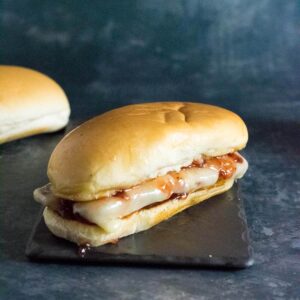 This recipe was originally published on FoxValleyFoodie.com on March 2, 2015.