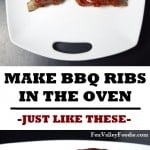 If you want to learn how to make BBQ ribs in the oven, you will love my simple two-step process: First bake the ribs in the oven till tender, then broil the sauce till it caramelizes. These are the best oven baked ribs you will ever have.

Tis the season.  Grilling tools are being replaced with snow shovels and the hammock is being traded in for the overstuffed chair in front of the fireplace.  However, that does not mean you still can't enjoy the spoils of the grilling season, indoors. During the cold winter months you can still savor finger-licking BBQ ribs without dashing through the snow to your favorite smoker. You can make great BBQ ribs in the oven.

How to Make Ribs Tender

Making ribs in your oven can quickly lead to disaster for many home cooks. Ribs by nature are tough pieces of meat.  It is only through a long, slow, cooking process that they begin to melt into that tender summer treat we crave to slather with succulent sauces.  Inexperienced home cooks will find that the ribs have come up to a safe serving temperature and take them out of the oven well before they are actually done.

Unlike many pieces of meat, just because the ribs have come to the proper temperature does not actually mean they are done cooking.  Instead, they need to continue to cook so the collagen (connective tissue) breaks down, rendering a much more tender piece of meat.

There is a household phrase that continues to be a misnomer of ideal BBQ ribs: "Fall of the bone."  You do not want "Fall off the bone" ribs.  These have been overcooked and feature a mushy texture - more reminiscent of a lazy crock-pot cook than a seasoned pit-master.

When Are Ribs Done

Properly cooked rib meat should threaten to crack when held up with tongs, and the bones should be able to be pulled away fairly cleanly with a firm twist. However, the meat should not come separated from the bone without assistance and should not lend itself to be described as "falling off the bone."  A properly cooked rib should be soft and tender but yet still have a slight chew to the meat, much like a very tender steak.

How to Remove the Membrane

To begin making the best BBQ ribs in your oven start by removing the membrane from under the ribs. This can be tricky for some, but it is pretty easy with this trick. Simply slide a spoon between the membrane and a bone to loosen it up, then I use a napkin for grip and pull it off the slab in one strip. The napkin prevents your fingers from slipping off.

Once this is done the meat can be seasoned with your favorite dry rub or simply some salt, then they are ready to cook in the oven.

How to Make Ribs in the Oven

When cooking ribs outdoors I adhere to strict traditionalism.  I use a smoker (affiliate link) and I do not take shortcuts in their preparation.  I use a very common slow and slow '3-2-1 rib method', figuring if it is good enough for competition pit-masters, it is the method I should get acquainted with.  However, when I make BBQ ribs the oven I don't prefer utilizing the 3-2-1 method.

My favorite oven rib recipe is a simple two-step process: First bake the ribs at 350 degrees for two hours until tender, then broil the sauce till it caramelizes. The ribs are wrapped while baking in the oven.

Wrapping the ribs in foil helps speed the cooking process while ensuring they are melt-in-your-mouth tender. This is also referred to as the Texas Crutch. However, after two hours of cooking, we will unwrap the ribs to apply the sauce.

How to Make Sticky Ribs

When the ribs are finished cooking we are going to caramelize the BBQ sauce under the broiler until they are delectably sticky. You will place the ribs under the broiler lacquer with additional sauce every few minutes until a hot sticky bark is formed. This will take 30-60 minutes total, depending on how thick you want the sauce.

Broiling the ribs coated in sauce is the secret to this recipe.  Broiling BBQ sauce will quickly cause it to boil, releasing moisture and causing it to thicken into a finger-lickingly delicious sticky jam. Not only will this thicker sauce adhere to the meat better, the flavor becomes more concentrated as well. Try this recipe with my homemade BBQ sauce!

BBQ sauce is high in sugar so carefully watch the ribs under the broiler as they can burn easily.  They should never be left under the broiler for more than a few minutes at a time without being moved around or adding additional sauce or you will be awoken to your mistake by smoke alarms.

What to Serve with BBQ 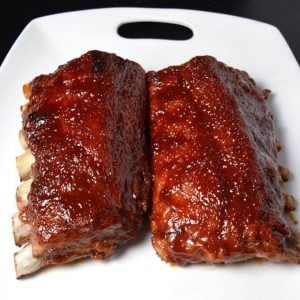 How to Make BBQ Ribs in the Oven

Cooking BBQ ribs in the oven can be just as delicious as outdoors and not very hard at all. These ribs are tender, sticky and delicious! Your friends and family won't be able to get enough of them!
4.97 from 28 votes
Print Pin Rate
Course: Main
Cuisine: American
Prep Time: 10 minutes
Cook Time: 2 hours 45 minutes
Total Time: 2 hours 55 minutes
Servings: 2
Calories: 550kcal
Author: Fox Valley Foodie

Remeber to keep an eye on the ribs while they are under the broiler. BBQ sauce will burn fast!   IF YOU LIKED THIS RECIPE check out my 3-2-1 Ribs Method too.

This recipe was originally published on FoxValleyFoodie.com December 9, 2012.

If you enjoyed reading how to make BBQ ribs in the oven then you should probably like me on Facebook and follow me on Pinterest too. That’s what I would do at least, because if you don’t get to know me but you still use my recipe it is kind of like taking candy from a stranger, and your mom taught you not to do that. Don’t disobey your mom, subscribe to Fox Valley Foodie today.