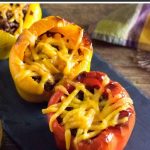 These flavorful BBQ stuffed peppers are loaded with seasoned ground beef, tender onions, and tangy barbeque sauce. Top them off with a layer of melted smoked cheddar cheese and you have a low-carb meal worthy of any smokehouse.

I love this recipe because of how easy it is to customize this main dish. You can switch out the cheese, add spicy peppers, or even load them with pulled pork instead.

The best way to make stuffed peppers is to bake the pepper separately while making the filling on the stove top. Cut off the tops of the peppers. The pepper tops can be discarded. Then the peppers should be set on a rimmed baking sheet to contain any juices and baked at 400 degrees for 25 minutes.

Meanwhile, add beef to a large skillet along with the chopped onion. Set the skillet over medium heat and cook until your beef has browned and the onion is tender. Add the minced garlic to the meat mixture and cook for an additional minute. Finally, stir in your barbecue sauce, Worcestershire sauce, and seasonings.

Tip: If you have burnt on fond in the bottom of your frying pan you can deglaze it with a little water prior to adding the BBQ sauce, just be sure to cook out the water so it isn't runny.

Remove the peppers from the oven and fill the cooked peppers halfway with the BBQ beef mixture. Add a layer of shredded cheese and fill with more beef. Top with an additional layer of cheese.

Set your broiler on high heat and place the BBQ stuffed peppers on the upper rack of your oven. Let broil for a couple of minutes, or until the cheese is melted and peppers have a slight char. Be sure to watch it closely because it will burn quickly.

Tip: If your peppers don't want to stand up properly pierce the bottom of the peppers with toothpicks for added stability.

Your stuffed peppers can be served whole or sliced in two pepper halves.

Ways to customize these stuffed peppers

Any leftover stuffed peppers should be stored in an airtight container, or covered in plastic wrap and set in your refrigerator. For the freshest flavor, I would enjoy within three days.

You can reheat the leftovers in a microwave. However, due to their thickness, they will have a difficult time reheating evenly. The best way to reheat them is to scoop out the filling, placing it in a small bowl, and reheat the pepper and BBQ mixture separately. 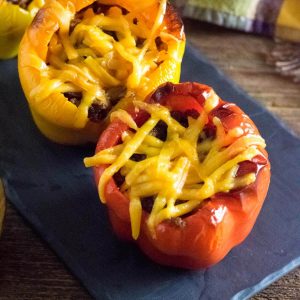