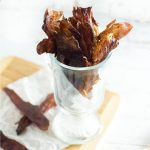 My homemade pork jerky is marinated in a sweet and spicy sauce and dried in a dehydrator until chewy and delicious! Making your own jerky is a great snack to enjoy in the outdoors or an everyday treat.

I recommend making your homemade pork jerky in a dehydrator, but for those who don't have one I will also explain how to make jerky in your oven, or smoker instead.

If you are craving more snack ideas, try my honey roasted chickpeas too.

The best jerky is made from thin slices of meat. You want to avoid cutting thick slices because it will take much longer to cook and the texture won't be as good.

The easiest way to cut your jerky properly is by partially freezing the meat. This firms it up so it is easier to work with. I recommend cutting your pork tenderloin in long quartered strips. By quartering the meat you allow it to partially freeze more consistently than if you left the tenderloin whole.

Let the meat sit in the freezer for two hours, then cut thinly with a chef's knife or use a deli slicer instead. You want the strips to be approximately ⅛" thick.

You will notice there are no spices and seasonings called for in the jerky marinade, such as I use in my beef jerky recipe. I found the seasoning dries to the exterior of the jerky, giving it a sandier texture. It is still delicious, but I wanted to make this recipe a bit cleaner.

All of the ingredients of this marinade will soak together to form one harmonious flavor, with many different notes. The marinade should be combined in a small bowl and added to a saucepan and simmered for 5-10 minutes to dissolve the brown sugar and allow the flavors to meld. Once simmered, cool off the marinade in the refrigerator at least to room temperature prior to adding the meat.

Tip: Adding the pork to a hot marinade will cook it and ruin the texture of your jerky.

Once the marinade has completely cooled add the pork to it and let marinate overnight. If you don't have time to let it sit overnight, I recommend marinating for at least two hours. Any excess marinade can be discarded.

I recommend marinating your meat in sealable gallon storage bags. Using a plastic bag makes it easier for the marinade to fully cover the meat.

How to make dehydrator pork jerky

When making pork jerky in the dehydrator it is important to spread the meat apart evenly in a single layer. You want all of the pork strips to get airflow. Set the dehydrator to 160 degrees and cook for 4 hours. Once an hour each tray should be rotated to ensure everything cooks evenly.

Start checking the jerky for doneness at 3 hours. The total cooking time will vary depending on how thin your jerky was sliced.

How to make it in the oven

Pork jerky can be made in the oven as well, but the problem is most ovens aren't able to be set at a low enough temperature to dehydrate properly. If you have a convection oven you will definitely want to turn on the convection fan to create air movement.

Pork jerky can be baked on the bottom rack of the oven at 180 degrees for 2 - 3 hours, or until the thin strips are dried and cooked through. If your oven temperature goes lower than 180 degrees you can cook it like using a dehydrator.

Tip: Place the jerky on parchment paper to avoid it sticking to your baking sheet as it dries.

How to make smoked pork jerky

Smoked pork jerky may be the most flavorful way to make it as each strip gets infused with a wonderfully smoking flavor. If smoking your jerky, there is no need to use liquid smoke in the recipe. Smoke your jerky at 160 degrees for four hours, just like using the dehydrator.

When is pork jerky done?

Your jerky is done when it reaches 160 degrees. The jerky should feel dry to the touch and the meat should no longer be soft or spoungy.

How to store pork jerky?

Is it safe to make pork jerky?

Yes, pork jerky is safe to make as long as it is prepared properly. Since most homemade recipes don't use preservatives reduce the risk of foodborne illness, it is best to fully cook your jerky in four hours or less to ensure the meat does not linger in the temperature danger zone where bacteria can form. Once the jerky is dried out it is safe to eat. 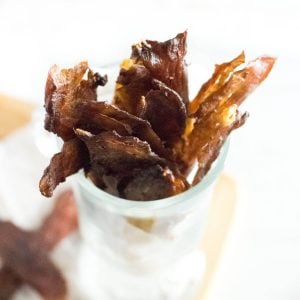 The jerky marinade can accommodate up to 1 ½ pounds of sliced meat.   Partially freezing the meat is important to be able to slice it thinly.