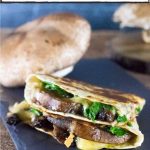 Need more vegetables in your diet, but you still crave comfort food? These mushroom quesadillas are the answer. These make for a hearty lunch and would be perfect served alongside homemade sweet potato fries.

Slice the mushrooms into thick strips and then toss with olive oil, salt, and pepper. One large mushroom cap is sufficient per quesadilla, however, if your store only has smaller caps you will have to use more.

Saute the mushrooms until cooked through and tender, add balsamic vinegar and stir to coat. Remove the mushrooms and add the tomato halves, cook for two minutes longer, or until tomatoes begin to burst. Remove tomatoes from heat and add 1 cup of fresh spinach leaves per quesadilla. Let cook until wilted. (alternatively, tomatoes and spinach can be cooked at the same time and removed as each finish cooking)

Assemble the quesadillas by adding mushrooms, tomato, wilted spinach, and ½ cup of cheese to one half of the tortilla, then fold shut. Cook in a skillet over medium-low heat until the tortilla is crisp and cheese has melted, flipping once. Let cool slightly and serve.

Don't have portobellos? You can use any of your favorite fresh mushrooms as a substitution. Smaller mushrooms may just fall out of the quesadilla more easily as you eat it.

If you don't have balsamic vinegar on hand you can substitute red wine vinegar.

I often make my quesadillas simply by placing them into a skillet to crisp, but you can add a small amount of butter to the skillet for addition browning. 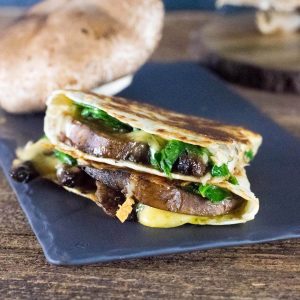 Scale this recipe up as needed. Plan on using one large mushroom cap, one cup of fresh spinach, 2 tablespoons of tomatoes, and ½ cup of cheese per quesadilla.