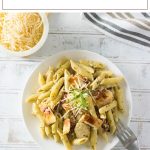 Want to impress someone with a gourmet twist on a classic dish? Or perhaps someone just talks too much at the dinner table and you want to keep their mouth preoccupied. Either way, what better way to do that than with an incredibly flavorful meal they will be too busy eating by the forkful to say anything except the occasional exclamation of praise for the chef.

My pesto alfredo recipe starts with a classic alfredo sauce base, with the bright punch of pesto blended into it. This is served over noodles with chicken and sun-dried tomatoes. The tomatoes can be removed from the recipe if you don't care for them, without greatly affecting the final dish.

Chicken alfredo is a classic combination, so I added chicken to my pesto alfredo as well. The recipe calls for pan-searing the chicken breasts, which works great, however, you can bake them instead if you wish. You could even use leftover chicken in a pinch.

I recommend using a meat mallet (affiliate link) to pound the chicken breasts into a 1" thickness. This will allow them to cook more evenly, as well as cook quicker. The slightly thinner breasts will also be a better size for slicing and incorporating into the dish. No one wants a giant chunk of chicken on their fork!

What Noodles for Alfredo

I used penne pasta in this alfredo recipe, however, that is admittedly not the traditional choice. Penne pasta just sounded really good to me at the time, so I ran with it. The traditional noodle choice for an alfredo dish is fettuccini. You can certainly substitute fettuccini noodles instead of penne in this dish, but penne works great too!

How to Make Alfredo Sauce

This pesto alfredo is made the same way as a classic alfredo sauce. Start by making a roux, which is an equal mixture of butter and flour continuously stirred in a skillet until the flour cooks out. Then slowly add half and half to create the base of the sauce.

Tip: It is important to add the half and half a few splashes at a time, while stirring, to ensure it incorporates smoothly.

Once the half and half has been added, then you can sprinkle in Parmesan cheese. Keep stirring, and slowly add more cheese until it has all melted into the sauce. Parmesan is the primary flavoring agent for alfredo sauce. This recipe adds a twist by also mixing in pesto. 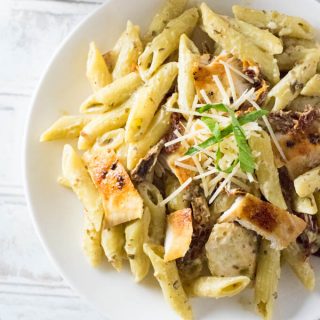 You can substitute fetticcini noodles instead in this recipe if you wish.   IF YOU LIKED THIS RECIPE you will love my Chili's Cajun Chicken Pasta as well!