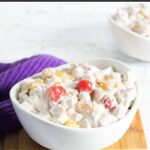 Heavenly hash is a creamy dessert loaded with fruit, marshmallows, slivered almonds, and a hint of chocolate. This easy recipe is perfect to prepare for holidays, or when you are looking for an easy dish to pass at your next potluck. Plus, it is a great crowd-pleaser, particularly with the kids!

Heavenly has is an easy dessert that is similar to an ambrosia salad, and is often described interchangeably, while also borrowing flavors from Heavenly Hash ice cream. There aren't many rules for this dessert to follow, as it falls into the category of recipes that can vary wildly from one household to the next.

The main component that is recognizable in almost every heavenly hash recipe is the use of marshmallows. Chocolate flavor and almonds are the next two most popular additions, while a fruit cocktail medley is often added when making heavenly hash in an ambrosia salad style. Ultimately, there are no rules set in stone, so this is a great recipe to customize to fit your own preferences.

You can substitute your favorite canned fruit rather than using the ones listed. Canned fruit cocktail is a perfect choice because it contains a mixture of fruit, otherwise, you can even add fresh fruits such as green grapes. If you want more chocolate flavor added, use chocolate chips or chop up some chocolate bars into pieces and mix them in as well.

This heavenly hash recipe comes together in five minutes. To make it, simply mix the Cool Whip, sour cream, and cocoa powder together in a large bowl. Then fold in the mini marshmallows, fruit, and almonds with a rubber spatula. Once everything is mixed together it is ready to be served.

How to store leftovers

Heavenly hash can be made in advance and stored in the refrigerator until you wish to enjoy it (the flavor is even better the next day). I recommend eating it within three days for best flavor and texture. Store leftovers in an airtight container, or cover the bowl with plastic wrap to prevent odors from your refrigerator from altering the flavor. 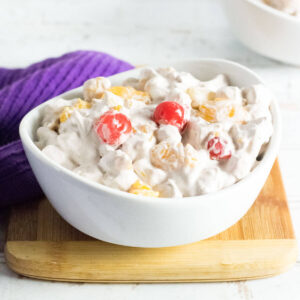 Your whipped topping mixes best if it is slightly thawed. You can place it in the refrigerator prior to making this recipe, or leave it on the counter briefly until slightly softened. Otherwise, you can quickly microwave it (in an appropriate container) if needed.