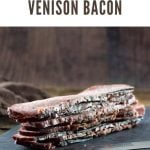 Venison bacon is a sweet and smoky formed bacon made with a mixture of ground venison and pork fat which is seasoned, cured, and smoked.

This recipe has been on my to-do list for a long time. Venison bacon is a very popular treat in hunting circles, but I never could find any recipes to make my own, just pre-made cure mixes that had to be purchased. For those of us who take a lot of pride butchering our own deer and processing everything from scratch, that wasn't acceptable. So I set out to create this recipe.

Venison bacon is made with ground meat, rather than a whole cut such as pork belly in traditional bacon, and is sometimes more accurately called formed ground bacon. It is prepared and cooked like venison sausage, but loaded with bacon seasonings and thinly sliced.

Venison has a distinctly different flavor than pork which will be reflected in the bacon. However, venison bacon does have the same traits as traditional bacon - wonderfully sweet, smoky, and salty!

The list of equipment needed for making venison bacon includes affiliate links, allowing you to quickly and easily purchase the same equipment I use from Amazon.

If you don't regularly make bacon or sausage, there are a few ingredients you need for venison bacon that you don't likely keep on hand.

How to Make Venison Bacon

Venison bacon is best smoked at a low temperature that is slowly stepped up to allow the meat to soak in the smoke flavor before fat starts rendering from cooking. I recommend setting your smoker to 130 degrees and added mild-flavored wood chips, such as apple wood. Every hour the temperature can be raised 10 degrees until the smoker reaches 180 degrees. The bacon is done when it reaches an internal temperature of 160. 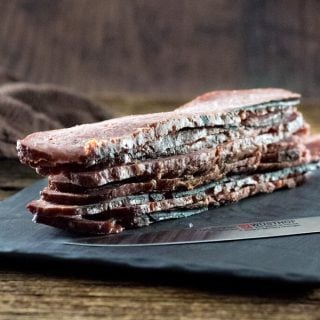 This recipe calls for 30% fat, but you will still get good results with 20% fat as well if that is what you have on hand.   IF YOU LIKED THIS RECIPE check out all of my Venison Recipes as well!