Roasted ham and potatoes is a mouthwatering melding of flavors as the basting ham juices pools together in a hot sticky potato bath of yumminess!

Does anything smell better than a house with a ham in the oven? I am pretty sure when I die and go up to heaven I will be greeted at the Pearly Gates by the smell of a roasted ham and potatoes. As we all know, God is a Foodie after all.

The great thing about ham is the lack of effort required to roast it well. Seriously, you have to be a pretty bad cook to screw up ham. Ham is already pre-cooked; you are just slowly bringing it back up to temperature. If you can’t do that I suspect your gene pool may have needed a lifeguard. 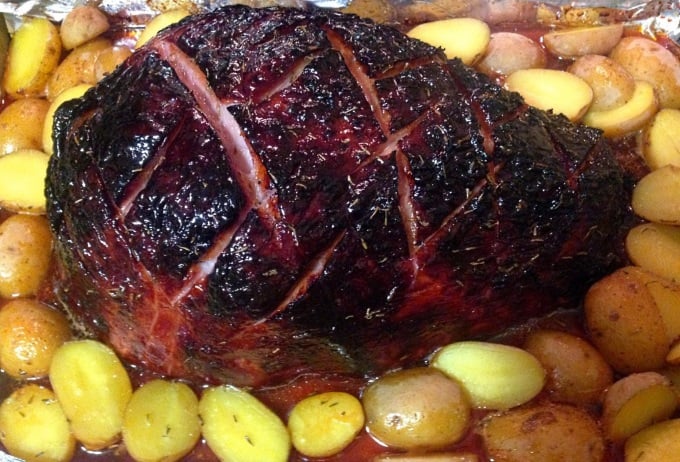 If you are apprehensive about roasting a ham, don't fret.  I have a few tips for you:

I typically don't get overly concerned with roasted ham recipes. 99% of ham recipes only flavor the exterior of the ham with glazes or seasonings, resulting in every interior slice of ham tasting the same regardless. However, adding a glaze to your ham is great for roasting ham and potatoes in the same pan!

Laying potatoes around the base of your ham and then occasionally basting your ham will result in the glaze and ham juices pooling together in a hot sticky potato bath of yumminess! As your ham slowly bakes the potatoes will soak in the pooling juices; gently boiling, roasting, and frying. By the time your ham is done your potatoes will be heavenly!

Don’t use russet potatoes for this recipe. You need red or golden potatoes. They hold up better to longer cooking times without falling apart. The thyme, honey and cider vinegar in this recipe will give these potatoes exceptional flavor! 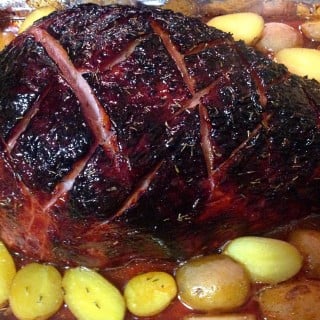 This ham glaze will serve not only to make a delicious ham but it will also results in some of the most flavorful potatoes you've ever had the pleasure of eating!
5 from 3 votes
Print Pin Rate
Course: Main
Cuisine: American
Prep Time: 10 minutes
Cook Time: 1 hour 30 minutes
Total Time: 1 hour 40 minutes
Servings: 10 (varies)
Calories: 500kcal
Author: Fox Valley Foodie

If you enjoyed reading my Roasted Ham and Potatoes recipe then you should probably like me on Facebook and follow me on Pinterest too. That’s what I would do at least, because if you don’t get to know me but you still use my recipe it is kind of like taking candy from a stranger, and your mom taught you not to do that. Don’t disobey your mom, subscribe to Fox Valley Foodie today.