Tender rice noodles, seared beef, and vibrant vegetables are bathed in a sticky Korean BBQ sauce you won’t be able to get enough of! This Korean BBQ Beef Stir Fry with Noodles is better than takeout!

I’ve had this Korean BBQ Beef Stir Fry with Noodles recipe on my to-do list for a few months now. When I am feeling lazy but still want to cook the family a nice supper I often make an easy version of this Korean BBQ stir fry by purchasing bottled sauces. However, I finally found a made-from-scratch version I like just as well, plus it is much cheaper to make your own, and not that much effort!

When making an Asian stir fry with noodles, wide rice noodles are always my top choice. They can be found in the Asian aisle of your grocery store, however, I’ve also been known to make a special stop at an Asian market just to pick these up because they often have wider noodles. The extra width of the noodle doesn’t affect the final dish, I just like them. In reality and Pad Thai noodle will work. If you are unsure if it is a rice noodle, just look at the ingredients on the back of the packaging.

A Korean BBQ Beef Stir Fry is a very versatile dish because any of your favorite vegetables can be added to it. I use peppers, onions, and baby corn in my recipe, however, you are free to substitute whatever you wish.

Don’t feel like you need to buy a wok to make Asain food. My kitchen is already overflowing with extra gadgets, pans, and utensils, so I never bought a wok. Instead, I just use a 12″ skillet and get exceptional results.

If your Korean BBQ sauce overcooks and gets too thick, just sprinkle in a small amount of water to thin it out. It is it too runny, cook it a few minutes longer to thicken. Easy Peasy, right? 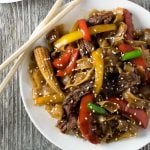 If you enjoyed reading my Korean BBQ Beef Stir Fry with Noodles recipe then you should probably like me on Facebook and follow me on Pinterest too. That’s what I would do at least, because if you don’t get to know me but you still use my recipe it is kind of like taking candy from a stranger, and your mom taught you not to do that. Don’t disobey your mom, subscribe to Fox Valley Foodie today.