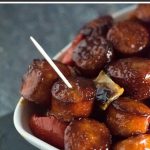 These aren't the same ol' boring party sausages in the crockpot, this BBQ smoke sausage gets broiled to perfection and broiled again to transform the sauce into a sticky jam. It is quicker than the slow cooker, and tastes one hundred times better!

How to broil sausage

These sausage bites are best broiled because broiling blisters and sears the exterior, adding a lot more flavor and texture. I recommend first lining your baking sheet with foil for easy cleanup, then spread the sliced smoked sausage evenly across the pan.

You want the baking rack on the highest position, then set the broiler to high heat. The sausage should broil for about 9 minutes. However, this can vary depending on the intensity of your broiling element, so be sure to watch it closely. If you see them burning, pull them out... common sense, right? You got this!

Painting them in barbeque sauce makes them taste good, but if you take the time to go one more step you will transform this easy appetizer into something phenomenal! Broil the sausage bites again after tossing in your favorite BBQ sauce. This will thicken the sauce, transforming it into an incredibly addicting stick jam. Since bbq sauces are high in sugar, this will only take a few minutes.

This recipe was inspired by the cocktail weeny appetizer, but I like smoked sausage because it is more substantial and has better texture. I also added peppers and onions because sausage, peppers, and onions is a classic combination. However, you can remove the vegetables from the recipe if desired. Or, better yet, swap in spicier peppers for an added kick! 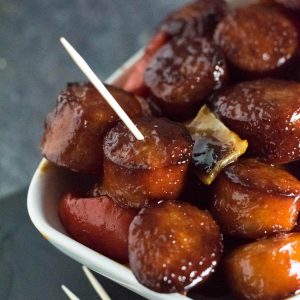 Food will burn under the broiler quickly. Pay close attention to it! Different ovens will have different cooking times depending on the heat coming off their broiler. Just broil it until it threatens to burn, then you are done.