When I'm hungry for Mexican food, you know what I'm really craving with it? A good American style salad bar… and perhaps even a little rap music playing in the background for ambiance. Yes my friends, sadly such a place exists and it is at Sergio’s in Appleton.

I was ravishingly hungry and craving Mexican food. I really wanted to go back to my favorite Mexican joint, Antojitos Mexicanos, and write up their long overdue review, but alas they were closed for the evening. That left me scrambling to find a plan B and a different Entertainment Book coupon for Mexican food, finally landing on Sergio's Grill.

The first thing I found peculiar upon reading the menu at Sergio’s was that most meals came with a salad bar. When I ordered my enchiladas they did not come with rice and beans. Instead I got to help myself to multiple trips to the all you can eat American style salad bar. Mmmm… how I love me some tuna salad with my enchiladas! <End Sarcasm>

The complimentary salsa and chips were also underwhelming. The salsa lacked consistency; most of it was smooth with the occasional interruption of a giant hunk of tomato. I also didn’t find them to be overly flavorful, though the very cumin centric mild salsa did grow on me after I had a bit more of it. I’ve had better salsa elsewhere in the valley. 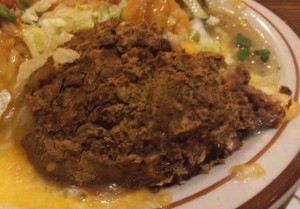 The main entrees were even more disappointing. My girlfriend was served a chalky paste formerly known as refried beans. Since the brown mass was noticeably dry and flaky on the outside (and interior) it left me to conclude the kitchen staff just has low standards if they were willing to glop that on a plate and send it out the door. The Spanish rice was barely better. As you got to the bottom of the serving it turned into a flavorless watery soup sitting on her plate. 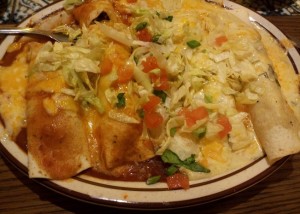 Finally, the prices surprised me. Each meal was a few dollars more than to be expected. Unless we pay a premium for rap music with our meal, I didn’t feel that atmosphere was overly special to justify tacking on a few extra dollars per meal. My enchilada was $14.50 and my girlfriend’s chimichanga was $12.99. I could have gotten a better version of each meal at Sangrias for $5.50 less.

In the end irony won the day. The best part of my meal was the American salad bar.