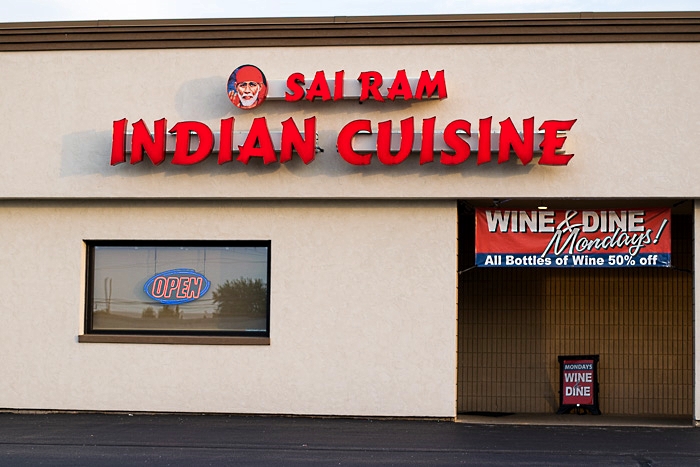 I’ve been wanting to try Sai Ram for some time now, mainly on the advice of friends who spend so much time there they should really just start having their mail forwarded. Sai Ram has been concocting curries in Appleton since 1999 and has built quite the reputation for their Indian food, winning Golden Fork awards for the past 13 years. I’d be curious to know if any other restaurant in the Fox Valley has won more awards.

Needless to say, I had high hopes while sitting down to eat.

I was joined by my wife and our newborn daughter, Lillian, for this meal. Lillian was getting a little fussy, prompting my wife to attempt to coax her into sleeping before our food arrived so she could enjoy an uninterrupted meal. 30 minutes later we were high-fiveing across the table as Lillian shut her eyes to rest right before the arrival of our food. Yes, we are that couple.

We had plenty of time to get Lillian to sleep since our service was noticeably slow. It took over 10 minutes for our server to stop by our table once we were seated. In his defense, I believe he was also managing the party of diners seated in the room behind me. Once at our table, I found him to be exceptionally courteous.

I found many items I was interested in trying on the menu, however I decided to go with the Vindaloo, a spicy curry dish from Goa cooked with potatoes, coconut, poppy seeds, and yogurt in a tangy spiced sauce. I also ordered a side of garlic nan for my wife and I to share.

Our waiter informed me the dish is already aggressively spiced, but did give me the option to make it hotter if I preferred. I took him up on the invitation.

The food arrived with basmati rice served on a separate platter from my vindaloo. I was impressed with how well the rice was cooked. It was perfectly tender, yet firm enough to hold its shape without forming a sticky mash. 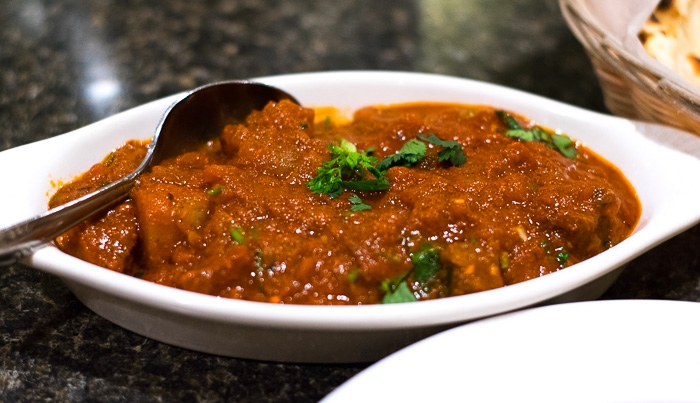 My vindaloo appeared to be prepared with equal care. The sauce was nicely spiced, there was a dried pepper shaker sitting on the table if I wanted the dish hotter, but I did not need to use it. I found that my vindaloo had the kick I wanted, without being overwhelming.   Its spiciness blended well with the other seasonings in the dish.

The curry contained sizable chunks of beef and potatoes as well. The beef appeared to be cubed stew meat, but it was cooked perfectly.   The cubed beef gently gave way as I took each bite, while still maintaining a slight chew. I found myself remarking in my head how easy it is for many restaurants to overcook the beef to the point where it just shreds upon contact. It is a common problem when serving similar cuts of beef, particularly with BBQ joints, as they try to keep the meat ready for serving it continues to cook to the point where it just becomes shreddable. 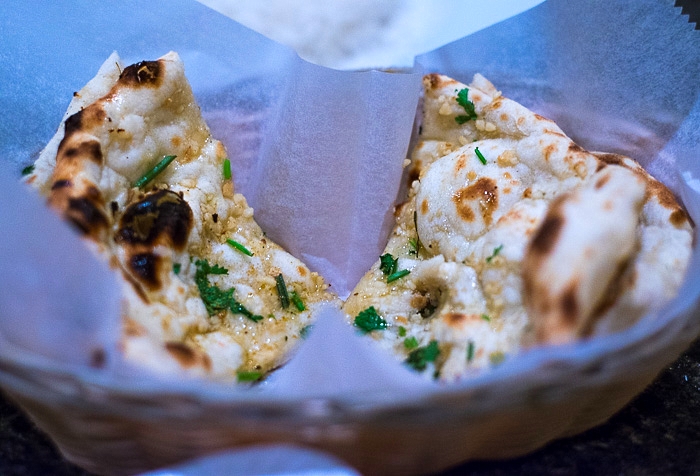 Then there was the nan bread. Oh, nan… These soft, chewy, slightly charred pieces of utterly scrumptious delight! My wife vowed to learn how to make these deliciously flat discs of leavened bread so we could eat them every day. I'm going to hold her to that.

Overall, the prices don’t make Sai Ram a steal, nor are you given obscene amounts of food for the money, but you get great food in a nice atmosphere.   It is their focus on quality that really sets them apart and has brought them so many accolades over the years. I can’t wait until I return, there are so many other menu offerings I look forward to trying.

Want more Fox Valley Foodie?  Subscribe today to get all the latest posts sent right to your inbox! You can also follow my musings by liking me on Facebook and find new favorite recipes by following me on Pinterest too!