In a few months you will have a choice when going downtown Appleton. You can go to your pick of bars that will serve you the same commercially produced beers that you can drink anywhere, and eat the same processed pre-frozen food that the Sysco truck drops off at each run of the mill eatery, or… you can saddle up to a bar that will serve you locally brewed suds that you cannot sip, slurp, or spill anywhere else and then enjoy a meal that was actually prepared in-house using real ingredients (novel idea, huh). If I haven’t gotten your attention yet, you obviously stumbled upon this blog by mistake.

This fall a group of family and friends will be opening the Appleton Beer Factory downtown Appleton fulfilling a long time dream of Jeff and Ben Fogle, a father and son team. Jeff’s wife Leah, a graduate from the culinary program at Fox Valley Tech, will serve as the head chef making all of the food in house using local and seasonal ingredients whenever possible. They are planning an ambitious menu of scratch made offerings such as housemade corned beef, fresh fish specials, and artisan pizzas. Stout cupcakes anyone? 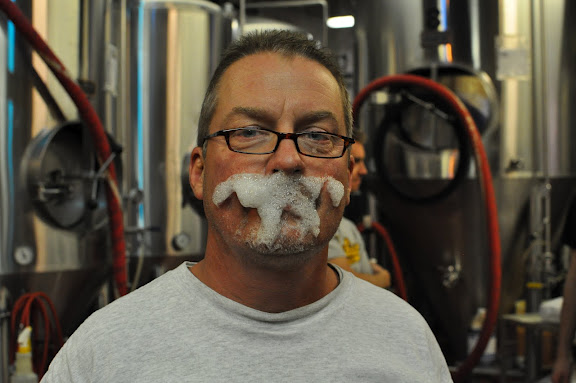 Jeff has been interested in brewing since he first worked on macrobrewing equipment as a pipefitter many years ago. He began experimenting with building his own equipment and making beer with his father, and like any good father son story, this passion has now shifted a generation. Jeff is still brewing, but now it is with Ben, his son. Honing their brewing chops over the years and inspired by their successes they watched as many other microbreweries opened throughout the country. Then sometime around 2006 they looked at each other and said, “Why can’t we do this?” And the planning begun. 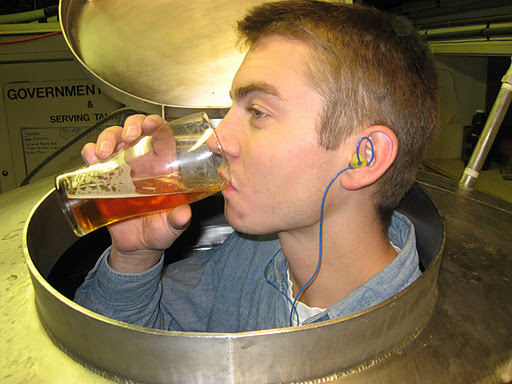 Ben Fogle - Ensuring there isn't a bad seat in the house.

The brewpub will be rotating a tantalizing selection of ales throughout the year along with some seasonal specialties. Offerings such as an oatmeal stout will reward those willing to broaden their horizons with a velvety smooth, slightly sweet beer which is easy on the palate. At the other end of the spectrum, hop heads such as myself can enjoy an American Pale Ale which will provide hop bitterness, flavor, and aroma while finishing with a light citrus flavor. In all, they expect to rotate through 6 – 10 beers throughout the year.

My love for downtown Appleton, craft beers and scratch cooking makes the premise behind the Appleton Beer Factory quite literally my ideal restaurant… down to the housemade corned beef (an essential ingredient to a well made reuben, my favorite sandwich). Though I have yet to apply my snobbery to the food or dissect the beer, I have to admit I am developing a bias. This is exactly the type of place that positively influences the culinary culture of a community and I want to see it succeed.

I feel invested in their success and hope they hold fast to their high standards of scratch cooking. I have just two requests:  #1) Please don't succumb to the temptation of serving pre-frozen bagged french fries. #2) If you ever need anyone for beer sampling, don't be bashful! 😉