If you are going somewhere for a special occasion in Appleton and you ask 10 people for a recommendation on a restaurant, it seems 5 of them will inevitably say, “Mark’s East Side”. I have had more recommendations to eat there over any other restaurant and it seems no one has anything bad to say. So for Valentine’s Day I decided it was time I finally try it for myself.

Since they get such high reviews I wanted to see if they could live up to the hype so I set up some high hurdles for them to clear by focusing my attention on menu items I am typically extra picky about. These include: Brandy Old Fashioned Cocktail, Deep Fried Cheese Curds, French Onion Soup, and French Fries.

These are each some of my favorite foods that I have consumed hundreds of times. Whether it is my own scratch made recipe, or the haunting memories of eating the perfectly prepared version of the dish at another establishment, the bar has been clearly defined in my head. Beyond these items, I did also order scallops and dessert, but more on that later.

Brandy Old Fashioned Sour Cocktail: I asked the waitress for cocktail recommendations and the first one out of her mouth was the Old Fashioned. I didn’t need to hear any more, that was the one I knew I wanted. When I am in the mood for a cocktail at home, this is the one I always make. The verdict? I enjoyed theirs better than mine (and mine is good!). I think they add more bitters to their cocktail than I typically do. I will be adjusting my recipe moving forward.

Deep Fried Cheese Curds: My girlfriend and I were hungry for an appetizer and we both love deep fried cheese curds. I am still haunted by memories of the deep fried cheese curds served at the Marathon County Fair in 2005. I have never since had curds that have come remotely close to how amazing those were… but I digress. I asked the server if they bread their own curds in-house, however I was disappointed to hear they don’t make those in-house. Since I can get the same underwhelming, frozen, pre-breaded cheese curds anywhere I declined to order them. 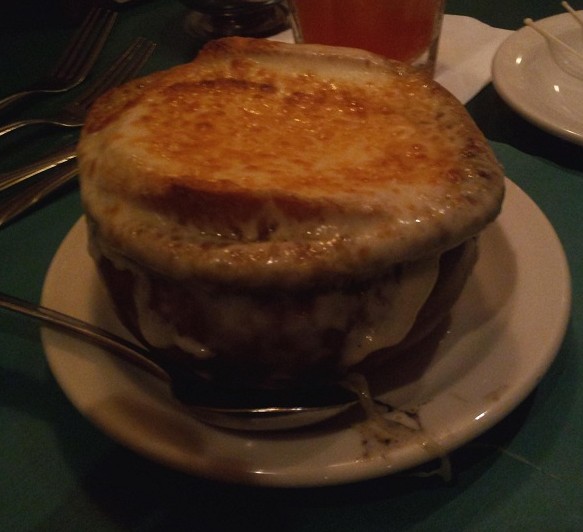 French Onion Soup: Using a modified version of Julia Child’s recipe, my French onion soup is one of my favorite recipes. When a friend told me Mark’s has a really good version of the dish and I couldn’t wait to try it, and my enthusiasm was not wasted. Their French onion soup was exceptional. The broth was a bit on the salty side, but that was not a bad thing, and the flavors in the broth tasted strikingly similar to my own version of the recipe. Though what really impressed me was how their cheese-topped bread was sturdy enough to stay in the soup until I got around to eating it. It did not disintegrate into soggy clumps the minute I pierced it with my spoon. I think it should be a requirement that everyone orders this soup whenever they find themselves at Mark’s. This is the best version of French onion soup I have ever had at a restaurant.

French Fries: Yes, French fries. The bane of eating at Fox Valley establishments. As though it is some sort of culinary mystery, scratch made French fries continue to elude most area restaurant kitchens in favor of easier pre-made frozen versions that are dropped off by restaurant supply trucks. To my great disappointment Mark’s East Side has succumbed to this temptation too, not only serving pre-made frozen fries, but crinkle-cut ones at that… my least favorite version. Yes, I know I could have ordered a baked potato or something and it would have likely been made in house but I was hungry for French fries. And since I am eating at a nice restaurant that prides itself on serving elevated food, I would expect their high standards to apply to all of the food they plate. So unless I am ordering from the kid’s menu, I don’t want the same French fries that my mom made me as a kid. 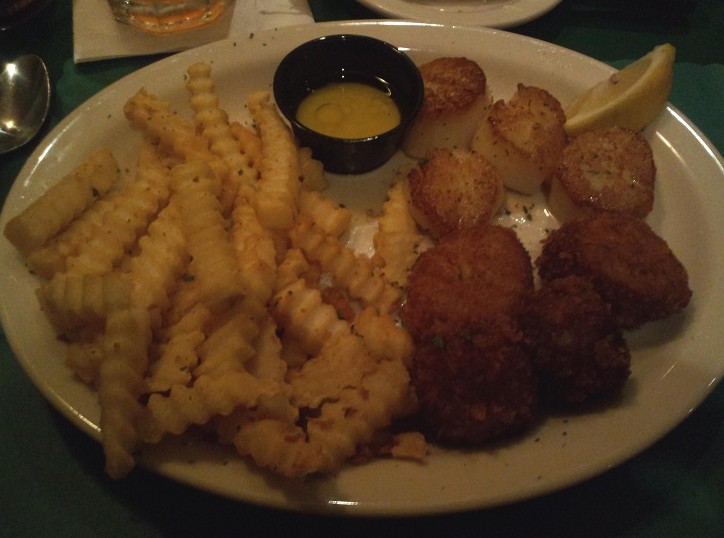 So what of the other food that was ordered? I had scallops as my main dish and they were cooked perfectly. I requested half pan seared and half breaded and I enjoyed both. I would be hard pressed to pick a favorite. The deep fried scallops were breaded with panko which added a nice extra crunch. My girlfriend’s chicken cordon bleu was fantastic as well; the meat was juicy, with a healthy serving of ham cheese and hollandaise. Both of the main dishes lived up to the reputation of Mark’s East Side.

Finally for dessert we ordered the chocolate bread pudding and the crème brulee. The crème brulee was the hands down favorite for both my girlfriend and myself. It was creamy, and sweet, with a perfectly charred crust. The bread pudding, though tasty, was not as sweet as either of us would have preferred. It wasn’t bad, but I wouldn’t order it again.

So overall, what was the verdict? I would happily return to Mark’s East Side again. Yes, I wish their whole menu was prepared in-house from scratch, but that is exceedingly difficult to find in the Fox Valley. The French Onion soup alone is worth returning for and there were multiple other menu items I really want to try. Perhaps someday I’ll convince the world that scratch made food always tastes best, but until that day I’ll happily eat at Mark’s and just avoid the fries.