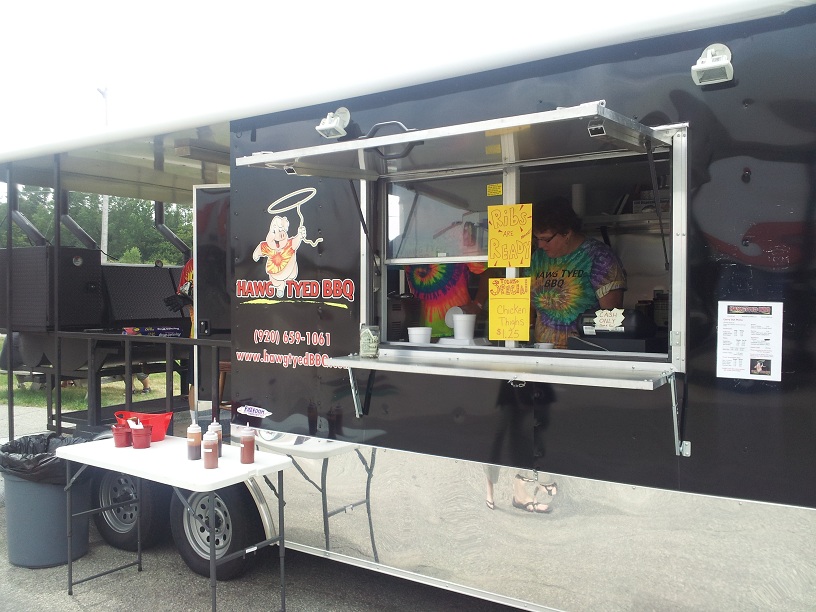 Hawg Tyed BBQ consists of a large trailer equipped with all of the necessary equipment to cook and serve delicious BBQ. It is like the best backyard ever, except on wheels! Serving mainly on weekends they are often found in two locations: “Northsider” and “Southsider”. Northsider is the gas station at the corner of JJ and Richmond in Appleton and Southsider is the corner of Midway and S. Oneida in Menasha. 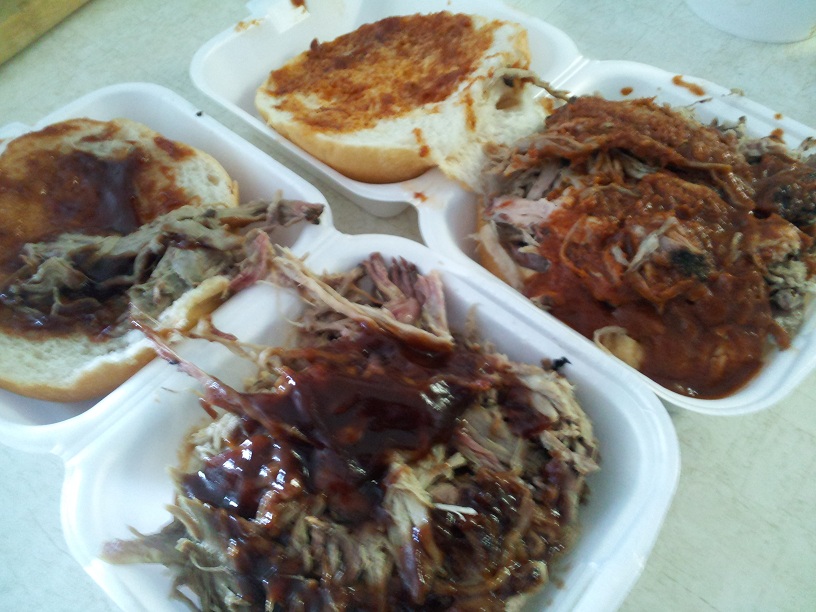 This isn’t ‘throw pork in a crock pot, add a bottle of Sweet Baby Rays, and call it a day’ BBQ. This is real BBQ. Lunch at Hawg Tyed will leave you with the lingering flavor of smoke teasing your tastebuds for the remainder of the day.

On my most recent trip to Hawg Tyed BBQ I ordered an exceptional pulled pork sandwich. The meat was very flavorful and served on a bun without sauce so you are able to add any of the four homemade BBQs they offer, as desired. If you like sauce as much as I do I recommend adding a lot more BBQ sauce than you think you’ll need. It takes a good amount to make a finger-lickingly delicious sloppy sandwich.

I was equally happy with my side dishes. The mac and cheese was perfectly rich and creamy. I am not sure if it was a residual taste from the BBQ but I think I detected a smoked cheddar. It was equally enjoyable for this 30 year old foodie as for my girlfriend’s two year old son. Proof that kids will enjoy more than just Kraft.

What I really enjoyed was their BBQ beans! I’ll be honest; I had low expectations for them. Most places that make their own beans plop a watery bean soup on your plate, making you long for a certain canned version made from a recipe known only by a man and his talking dog Jake. However Hawg Tyed’s beans were perfect! Thick and saucey with large chunks of meat (Bacon!) and onions, I could have eaten a whole quart. 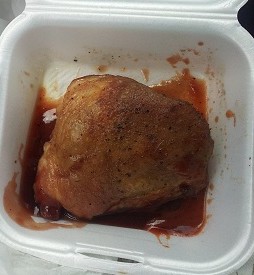 However, what I really recommend is their smoked chicken thighs. They do not always serve them so be sure to take advantage when you can. They are exceedingly moist with a mouthwateringly salty skin. Try one and then thank me. I’ll only charge you a $1 per thigh finder’s fee.

Speaking of money. You do not need much to enjoy this BBQ. I fed two adults and a kid more food than we could eat for a measly $16. How can you go wrong with that?

Maybe it is the residual evolutionary remains of the primal hunter DNA in my blood, but I kinda enjoy having to chase after my food. Though be sure to check Hawg Tyed’s Facebook page to hunt down their current location before heading out.

It's great to have another BBQ option in the Fox Valley, particularly a non-chain. When you try it, let me know what you think!

Previous Post: « This is What I Want in the Fox Valley
Next Post: Mark's East Side Review - Appleton, Wi »